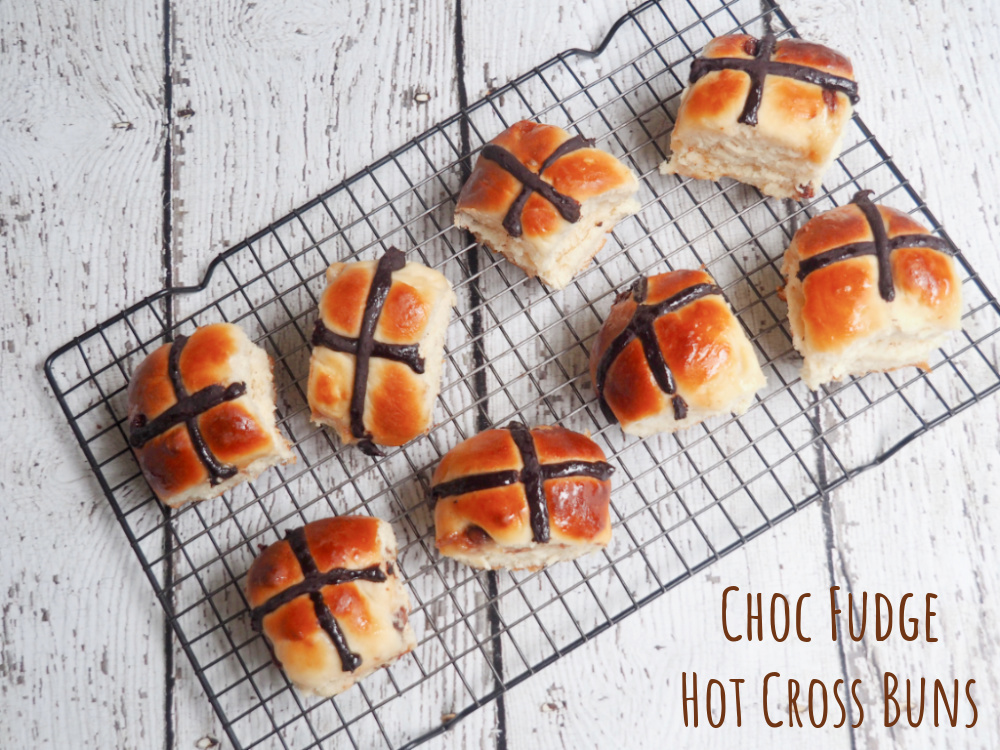 I have been obsessed with the choc fudge hot cross bun combo for a year now since I first tried Marks and Spencer salted caramel and choc chip hot cross buns when I was in the UK last year… Remember in the good old days when we could still travel? 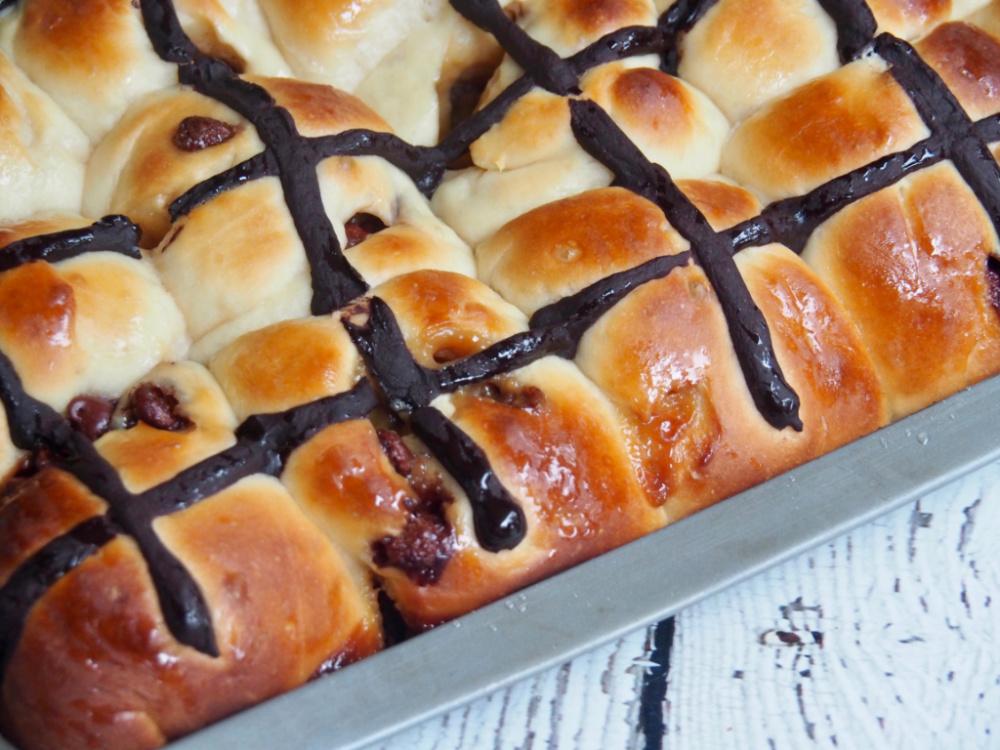 I was actually so obsessed with those hot cross buns that they became my staple diet while I was in the motherland. I was determined to re-create the hot cross bun deliciousness when I got back down under but then COVID came and all the yeast and flour flew off the shelves and well, you know what they say about best laid plans. 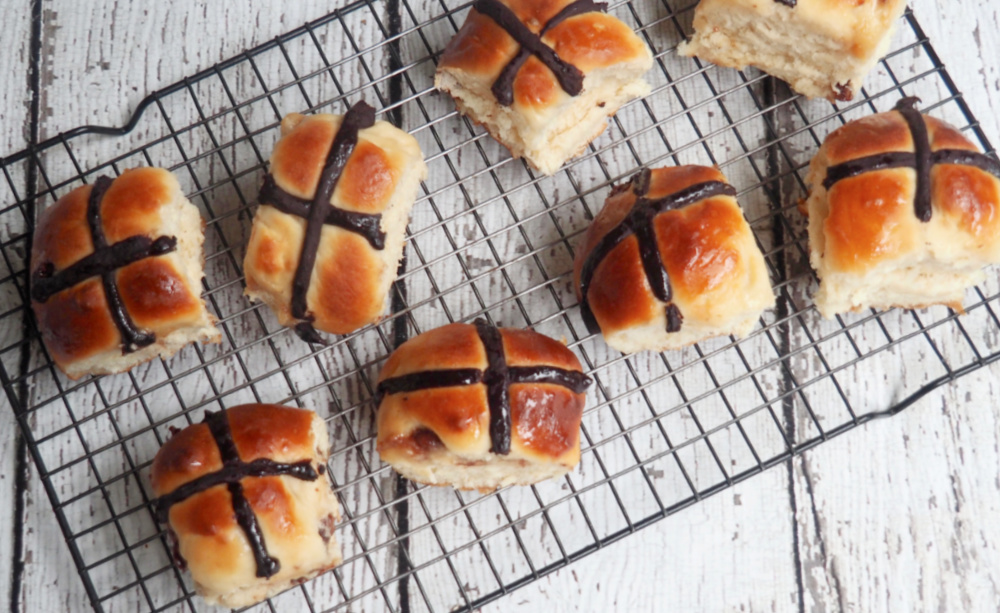 Then, just as the baking aisles were fully stocked again, my baking mojo did a runner so the hot cross bun idea was shelved again.

That was until last week, when the big rain came and I thought I would need to build an ark but decided to make some hot cross buns while I waited. It took three attempts to try and test the recipe until I got it hot cross perfect. It’s been a real labour of love and a delicious one at that! 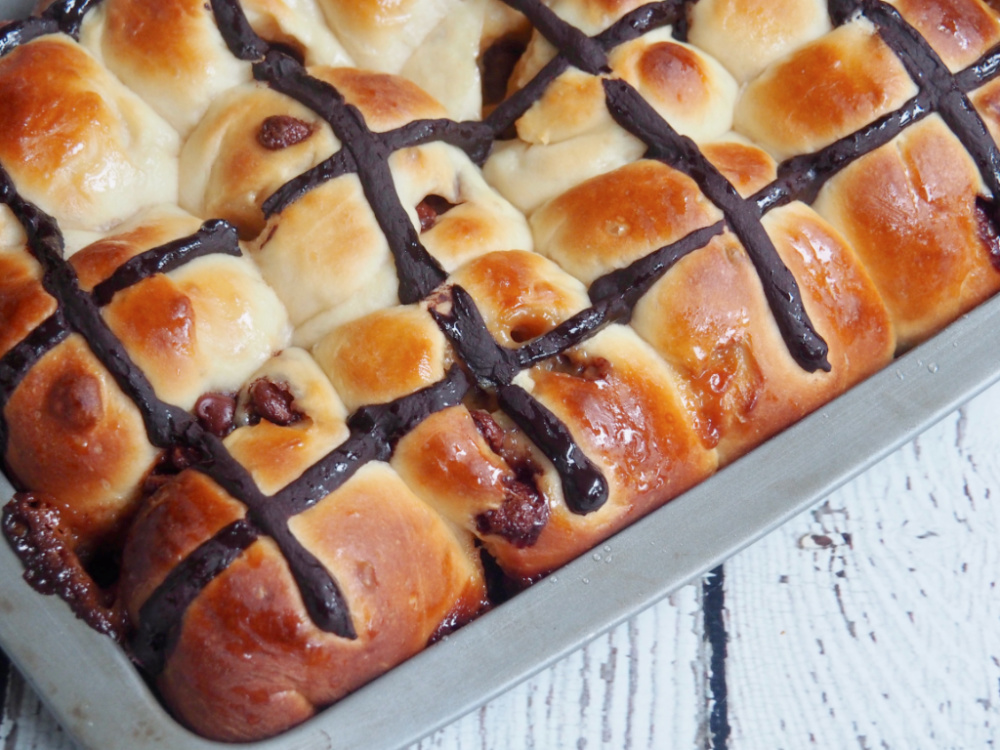 I have to be honest, I was so busy perfecting this recipe in the Thermomix, that I didn’t get time to test it without one. That said, I think this would work really well without a Thermomix plus you get a bonus bicep workout with all that kneading! 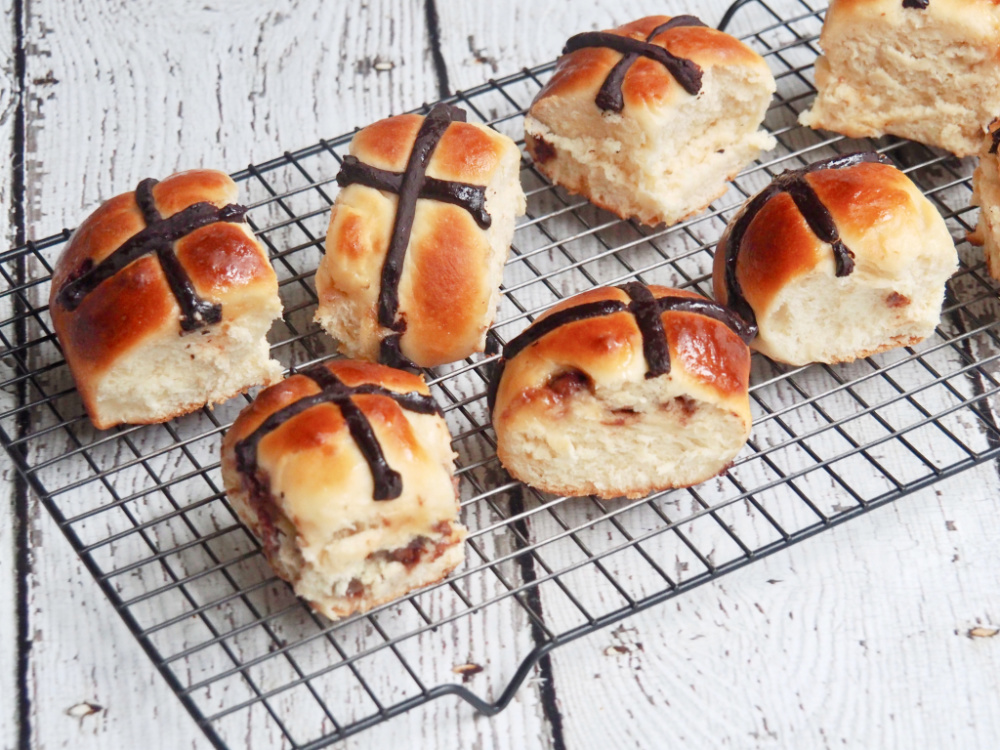 I’ve been a bit unconventional adding the fudge and choc chips “by hand,” but I found when I added the fillings to the thermie, the chocolate either melted or the blades got stuck. Rolling the dough with the choc chips and fudge makes for a more uniform filling and a more uniform bun, not that you’d know it from looking at my rustic buns! 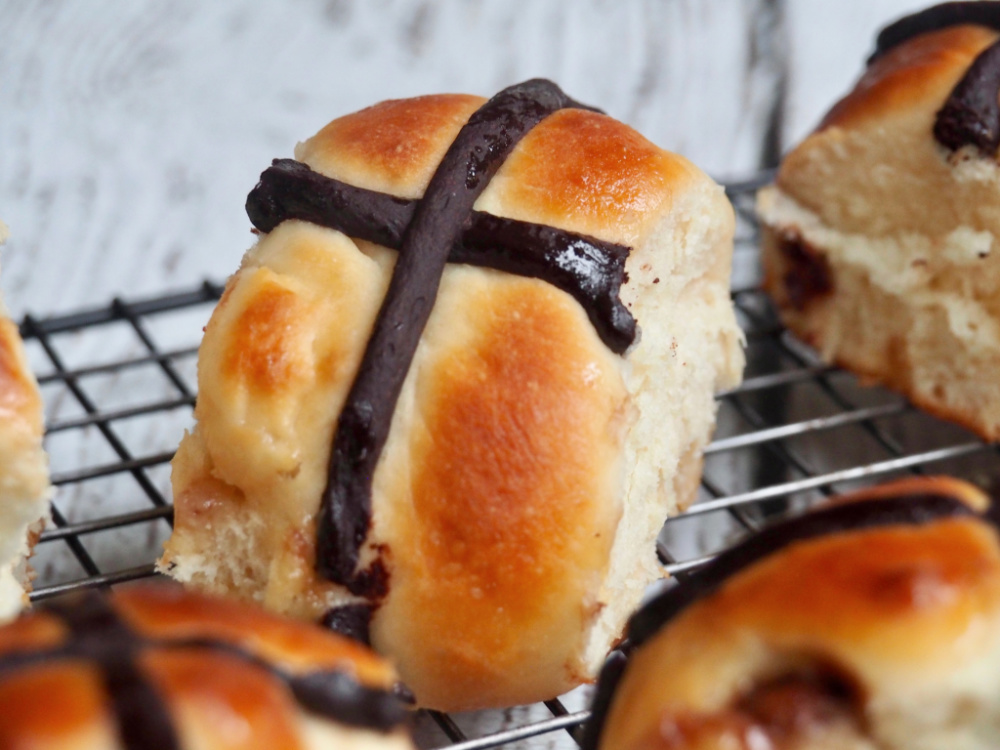 Now you know I’m a basic baker and my buns look very rustic but I promise you the taste so much better than they look. In fact my neighbour, Luce, the most honest but brutal taste tester of them all, said she’d give these 20 out of 10. I sent her up with a pack of 4 and she said they were so good, she ate one going up in the lift and she only lives on the 6th floor! Yep, I promise you friends they are so good! 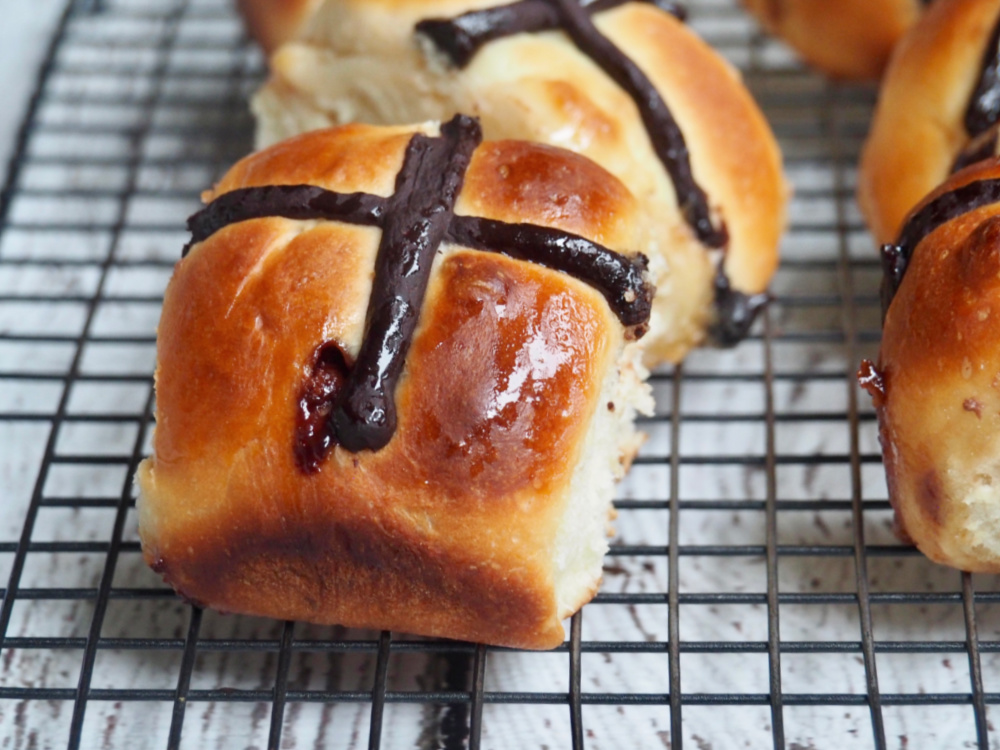 Once you’ve made your own hot cross buns, you won’t go back to shop bought. And homemade is so easy, the hardest part is waiting for the dough to rise so all you really need is some patience and a bit of elbow grease! These are so soft, so pillowy and so full of chocolately fudgey delicious that it’s impossible to stop at just one! 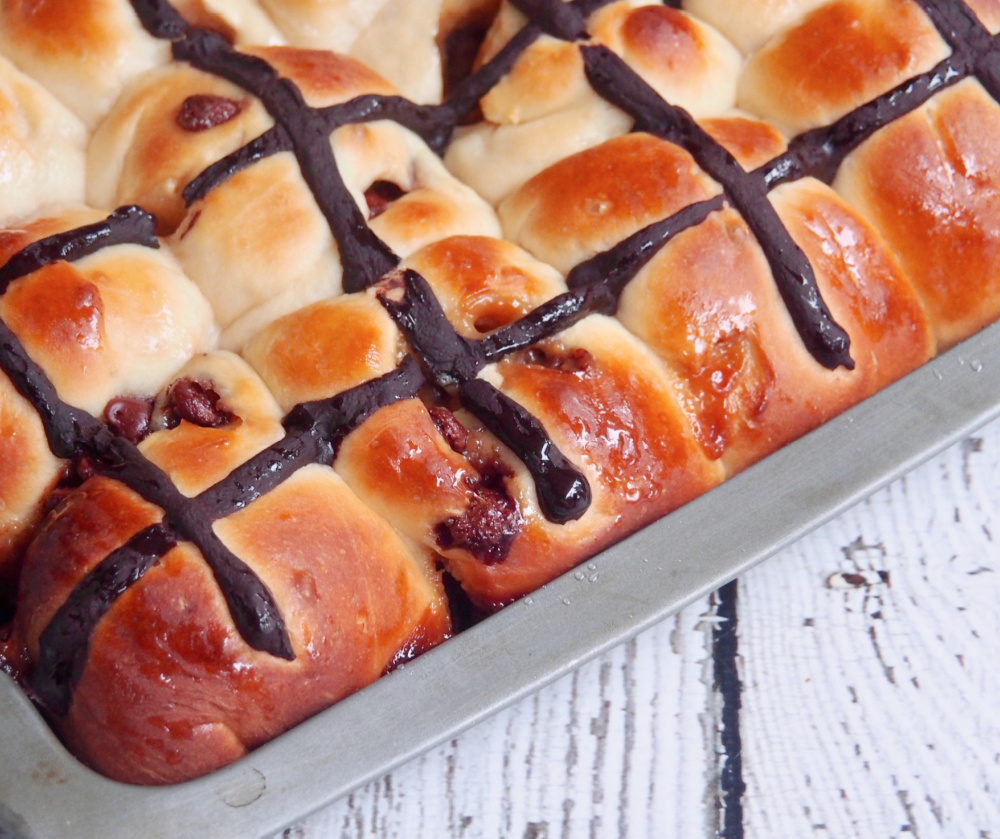 If you want fresh buns in the morning, you can leave the buns to slow prove in the fridge over night. In the morning pull it out of the fridge, let the dough sit on the bench for 45-60 minutes to come to room temperature and then pop into the oven and bake as normal. I can’t think of a more delicious way to start the day.

They’re light, fluffy and packed full of fudge and choc chips, can you think of anything better!

Are you a fan of hot cross buns? Have you ever recreated something you’ve eaten from a shop or in a restaurant? 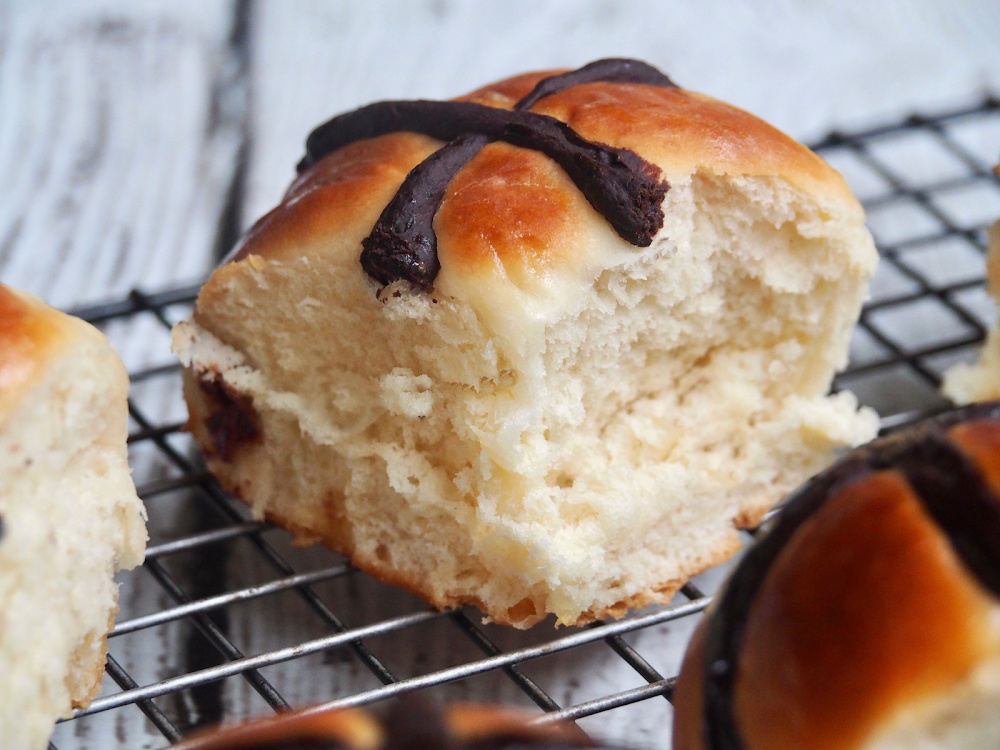 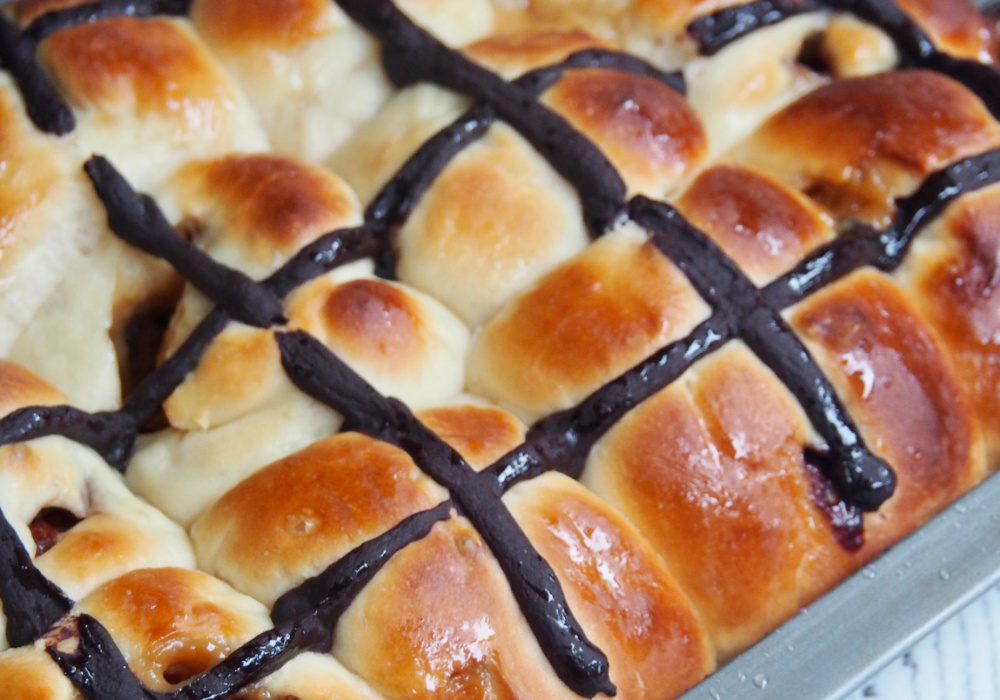 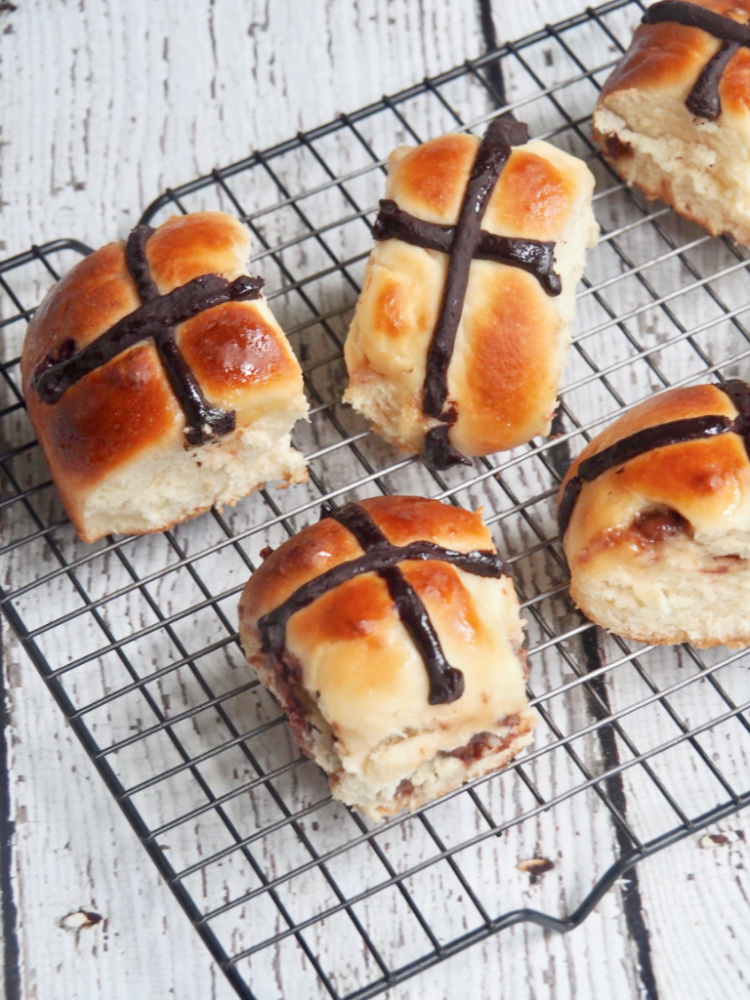