I oversleep! For real! I can’t get enough sleep all week and now it’s the weekend, I’m getting too much. Is there such a thing as too much sleep? This morning, I snooze all the way through to 10.30am and… Kathy’s coming to pick me up in an hour! This is incredibly bad timing! I hardly have time to scratch myself, let alone preen myself to perfection for my TV (audience) appearance!

One cup of tea, two pieces of toast and three outfit changes later, I’m ready and raring to go to the Biggest Loser Finale 2012. Kathy collects me  in her chariot, and we collect Tracey and Alice en route to the studi,o where we sign all singing, all dancing confidentiality documents and get a gold wristband which seals the deal on our VIP status, just for one day!

We imagine that we will proceed to the cafe, but in real life, we get personally escorted to the Green Room which has a well stocked, and, free bar and the lots of pleasing platters of fresh food. I waste no time and get stuck into the smoked salmon and the bubbly! We’re joined by some other VIPs and some of the contestants from previous years, who are now TV celebs in their own right. I get my photo taken with Sammie, a contestant from 2010 who is so svelte and stylish these days, that she’s been making over 2012 contestants this season! We have a “2 Sammies for the Price of 1” photo! Lifestyles of the rich and the famous! 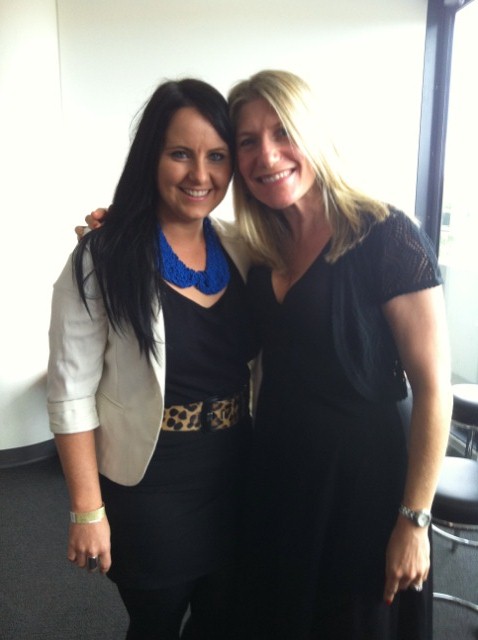 We have to walk past make up to get to the loo/changing room and we stumble upon and past, contestants in various stages of undress and make up. They’re all looking absolutely fabulous and we can’t wait for showtime!

We are eventually herded to the studio and have a prime perch in the centre at the back. I am thrilled when the MC gives Tracey and I a Commando poster. The Commando is probably the second sexiest man in Australia (because David’s the first, obviously!) and this man is hot to trot! Tracey and I shamelessly wave it around with wild abandon even though it says “I’m going Commando!” We’re Commando Crazy!

I’m a very lucky ducky because Kathy scored me tickets for the 2011 finale too. That was quite a night, and we had a blast. I thought I would spontaneously combust with excitement when I touched  the commando but luckily I survived unscathed, just a bit hot under the collar!

Filming the 2012 finale takes about 6 hours. However, it must be true what they say about time flying by when you’re having fun because it doesn’t seem half that long. The only telltale sign that time has been ticking are our numb bums! The finale is fantastic and the contestants look absolutely amazing. We’re blown away by their total transformations. It’s nothing short of  inspirational. There’s never been a better incentive to get fit and feel fabulous!

The show’s not over, even though the cameras have stopped rolling! Now there’s the after party to attend to! Think free bar, an endless supply of canapes and a plethora of photo opportunites with the trainers and the contestants. We’re snap happy and buoyed by the bubbly. We get photos with Shannon and Tiff, trainers extraordinaire and heaps of contestants including the winner, but our photo opportunity with the Commando eludes us. Finding him amid the throng of handbag waving women is about as easy as finding a needle in a haystack. I feel a bit sorry for His Royal Hunkiness, the poor bloke probably just wantd to kick back and relax with a cold beer (inbetween push ups!) We keep clear of the madding crowd and maintain dignity throughout!

Just like Cinderella, we all start to feel like we’re going to turn into pumpkins, it’s been a long day and we’ve worked hard. You try being a happy clapper in a TV audience! It’s no mean feat!  We figure it’s time to retire before we expire and head off home! Everyone’s a winner, baby! If you want to know who won this season,  you won’t hear it from me, see it for yourself next Monday night Channel 10! My lips are sealed!