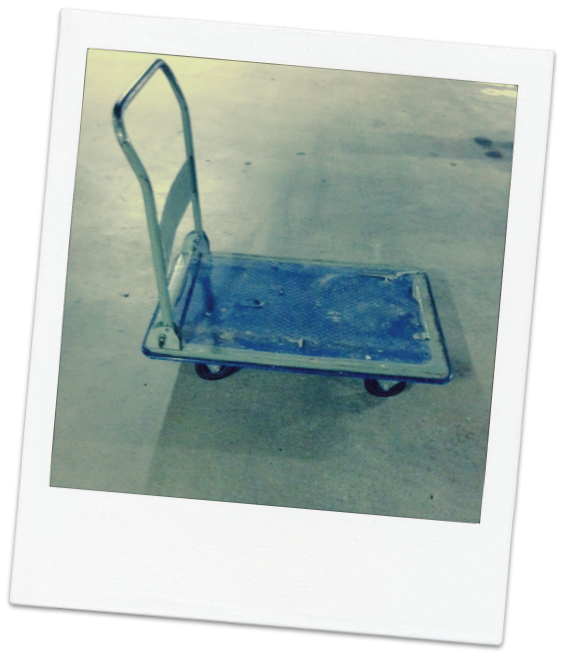 He may not look like a quintessential removal accessory, but he is. Kindly loaned to us by our building manager Wayne, Troy, has become our new best friend.

Self moving is a good idea in theory, but it’s not such a grand plan when put into practice.

We have saved heaps of money in removal costs but spent a lot of energy. Between the three of us, David, Troy and I have been up, down and around the garage, from old place to new, more times than I care to count. It’s a path very well travelled.

We lost count of the boxes we transported a long time ago. Believe me when I say there were a Lot. (And, no, that capital L is not a typo!) The boxes seem to reproduce themselves at an alarming rate, no matter how many we unpack, there are always more.

I have culled, feng shui-ed, donated to charity and handed me down enough items to furbish a whole new house, or at least that’s how it seems. And still, I have so much stuff. I don’t know quite where we’ll put it yet, but I do know I’m not ready to part with it either.

Now that we’re getting to the pointy end of the move, Troy has moved on from transporting boxes to moving a miscellaneous muddle of pretty much anything that’s left. We must look quite a sight speed wheeling through the garage with all our worldly goods on display! I am sure the neighbours are loving it! I’m pleased they are, because I’m not!

However, the end is in sight for Troy the trolley. I’m hoping  he can go into retirement on  Saturday which is coincidentally the same day  the internet is disconnected. Who knows when our internet will be back, up and running at the new abode? Not our internet provider, that’s for sure!

So if you don’t hear from me, for a while, don’t worry. I’m either taking Troy for a trundle, buried under boxes, waiting for the internet to come back on or laying in a dark room thinking of a calm blue ocean.

The joys of moving. It’s been quite an experience, but one I’m pleased I won’t have to repeat for quite some time!

When was the last time you moved? Was it a pleasure or a pain?