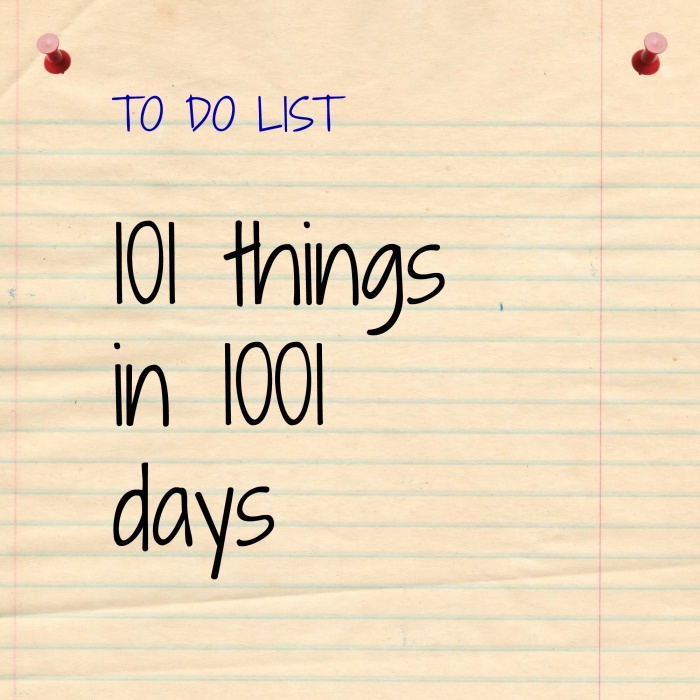 I’m always banging on how everyone needs a purpose. Viktor Frankl wrote about it, the cast of Avenue Q sang about it, my counsellor counselled me about it  and  now I live by it. Anyway,  a  while ago, I read Toni’s list ; 101 things in 1001 days and it really inspired me. You can read more about the challenge at the  Day Zero Project, I think I love the idea because it’s  a natural extension of my Wish List with a deadline to keep me on track. However, it took me almost 101 days to think of 101 things to achieve. There’s so much I’d like to do and so little time to do it in. So, no time to waste, I better get started!

This is how it works. My challenge  should I choose to accept it, is to complete 101 tasks in 1001 days. The only criteria  is that tasks must be really specific (either measurable or clearly defined.) They must also be realisitic and involve some engagement and effort on my part. My  challenge starts today,  March 25, 2014 and will end on December 20, 2016.

Progress so far  is not crash hot! 0 out of 101! Watch this space for further updates!

Phew! That’s a lot of things to do and a lot of fun to have. Will you join the challenge? What would be on your list?