Last night right before I went to bed, I started googling Run Disney stuff. This was a big mistake, nay, a huge mistake because I whipped myself into such a frenzy of excitement that I couldn’t sleep. There are only 49 days to go, after all!

This was doubly unfortunate because I had to be up at the crack of dawn with a full tank of energy to run in the Sydney Harbour 10k . This is one of my favourite runs because it’s my preferred distance, boasts  spectacular views and  has an uber-flat course . There’s even entertainment in the form of  Marco the juggling fruit fella.

Miraculously, I woke up before the birds and was full of beans. Who wouldn’t want to run a race that starts right here?

There was only 10km between me and the finish line.

So I put one foot in front of the other and I did it. I finished in 57 minutes and 37 seconds. It wasn’t my best time, and neither was it my worst. It was just today’s time. A time to be happy because I’m 10 kilometres closer to Disneyland and getting one of these babies. (Actually, I’m getting two, but let’s not split hairs.)

As it was, I got to add some Sydney style bling to my collection anyway.

The run was fun, and the bling was  brill but my personal event highlight was having an Instagreet with my insta-friend and fellow runner, Kim. (She who has the best looking dog in all the land.) She was even lovelier in real life than she is on Instagram, which is really saying something. In fact she’s so lovely that she didn’t  mind me brekkie-crashing her date with the hubster. This friendship was brought to you by Instagram. 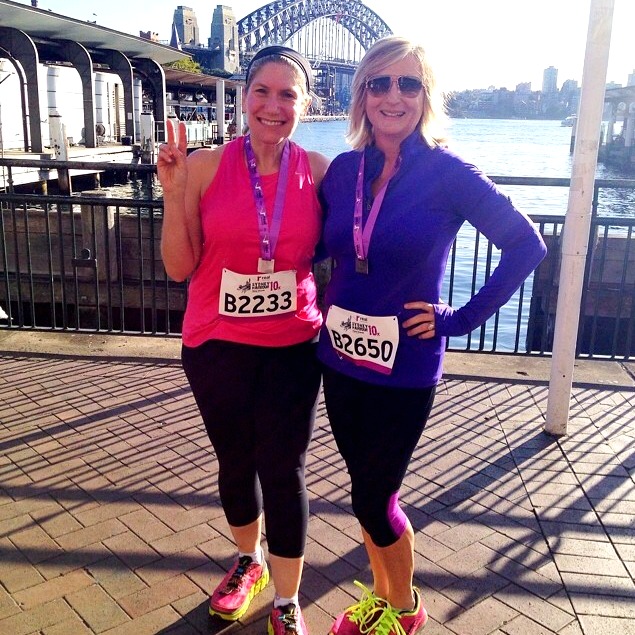 If that wasn’t cool enough, while I was brekkie-crashing, another runner came out of the restaurant and said “Sammie, is that you?” It turns out we’ve never met in person, but we’ve met oodles of time on the interwebs because Christine regularly reads and comments on my blog. It turns out she travelled interstate from Melbourne for the run and to celebrate her 39th wedding anniversary. Happy Anni, Christine! I wish you had told me you were coming to town!

Of course we had to have a group photo. People are always bad mouthing the interwebs, but this photo is evidence that good things happen and you can meet really good people on the net.

We three all ran 10km this morning. One of us beat cancer twice, one of us recovered from a serious back injury and another is going to run their first half marathon at 61 years young! Three women. Three choices – we could give up, give in or give it all we’ve got. Guess what we chose?

Have you ever met anyone awesome on the interwebs? Did you run the Sydney 10k?