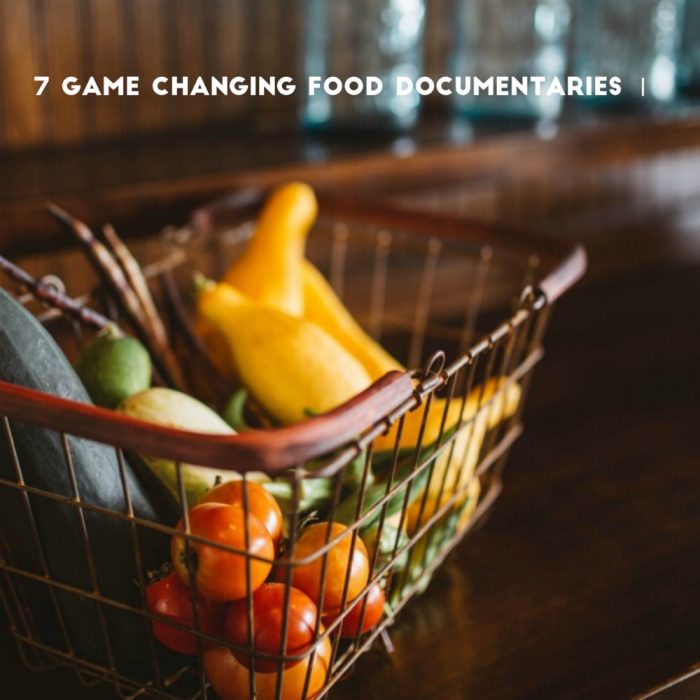 There’s an Ancient Egyptian Proverb that goes “one quarter of what you eat keeps you alive, the other three-quarters keeps your doctor alive.” Those Egyptians must have been on to something because, of the top 10 leading causes of death in the US, four are chronic diseases linked (although not exclusively,) to diet, namely, heart disease, cancer, stroke and diabetes. Between David and I, we’ve already crossed two of those off the list and we’re only in our mid forties. That’s scary stuff!

The fact that I watched my first food documentary when I was in hospital, in isolation and full of radioactivity to kill the cancer that was busy in my body is an irony that is not lost on me.

However, in the years since my diagnoses and David’s stroke, our diet has changed considerably. Rather than eating food that makes us sick, we’ve been choosing to eat foods that keep us healthy. Of course, I always make space for cake and other naughties, although these are occasional foods rather than daily ones, because in the words of the great Oscar Wilde, I believe “everything in moderation, including moderation.”

We’ve watched a whole heap of food documentaries over the years and I’m sharing with you some of my favourites, each one similar but different. I think each brings something unique to the table and we’ve taken away “ingredients” from each to make our own “recipe” for a diet that tastes good and is good for us.

What we’ve learned has totally changed the way we look at the food on our plate and while we’re not dietarily (and yes, I totally made up my own adjective) perfect, we’re trying to affect change with almost every meal we eat. We eat a lot more vegetarian meals (and not just on Mondays,) a lot less meat and a lot more fruit and veg. We’ve also kicked a hardcore soda habit, given up sweetener and swapped cows milk for almond milk. We don’t eat much processed food and when we do, we always read the label. We make more food from scratch because we like to know what’s in it and how it is made.

So here they are, seven of my favourite food documentaries. If nothing else, I promise they will  give you food for thought.

It was this documentary that started our Meatless Mondays. The movie examines the claim that by eliminating or greatly reducing the refined, processed and animal foods in our diet, we can prevent and even in some cases even reverse some of the worst diseases.

The movie follows the personal journeys of, and is based upon the body of work by Dr T Colin Campbell and Dr Caldwell Esselstyn, and examines the causal link between animal products and some of the most deadly diseases. As the ancient chinese proverb goes, “he that takes medicine and neglects diet, wastes the time of his doctor.”

Some might argue that a whole food, plant based diet is extreme, but Drs Campbell and Esselstyn argue that it’s not as extreme as the surgery many people are undergoing because of diet related diseases, hence the title of Forks Over Knives.

This film explores the work of Campbell and Esselstyn, includes some inspiring real life stories and  really puts the idea that food is medicine to the test. One thing is for sure, this documentary will certainly gives you lots of food for thought.

There’s an extensive website with tips, recipes and meal planners and you can watch the movie for free on Netflix.

In Defence of Food

Award winning author Michael Pollan brings an open mind, a fresh point of view and his prize winning book to the small screen as he strives to answer the  question “what should we eat to be healthy?”

In the documentary, Pollan explores how the western diet of cheap, convenience and processed foods is making us sick and shows how “you don’t have to be a scientist to have a healthy diet.”  As Pollan himself says, “it is very rare in life where the answer to a complicated question is so simple but when it comes to eating it is.” Pollan’s answer is a set of simple, sustainable guidelines for eating which are all about keeping it real.

Watch the movie free on Netflix.

It’s insightful, shocking, at times humorous and exposes the corruption between big businesses and government; why they’re withholding information, keeping people sick and making millions out of peoples’ ill health. It’s almost enough to make you turn vegan. If nothing else, this film will have you questioning where your food comes from and what’s behind food marketing messages.

The movie is free on Netflix.

This documentary follows the story of Aussie Joe Cross who in his own words is so obese, he looks like he’s swallowed a sheep. He’s also suffering from an auto-immune disease and pumped to the max full of steroids so he sets out on a mission to cure himself. He figures that if the body can heal itself on the outside, it can heal itself on the inside too.

The movie follows Joe as he supercharges his nutrient intake by juicing fruit and veggies for 60 days, while clocking up over 4800km road tripping across the USA. The film tells Joe’s story and those of the people he meets along the way. There’s some great animation which makes the topic really accessible and even Joe’s mum gets a cameo.

This inspiring and humorous documentary shows that what we put in our bodies, clearly relates to how healthy we can be. I think what I love most about this is that it’s all about moderation, not perfection. Plus there’s a sequel, Fat Sick and Nearly Dead 2.

Watch for free either on Netflix or online.

Over Fed and Under Nourished

Another Aussie favourite, this documentary examines the global obesity epidemic and modern lifestyle through one young boy’s journey to try and transform his health from the inside out. It’s interspersed with interviews and advice from leading health experts, including Joe Cross who sums it up really rather nicely, “if you eat too much food made by people in white coats, you know what happens? You end up seeing people in white coats.”

Derek Sivers once gave a TED  talk where he talked about the doctors in China who believe it is their job to keep you healthy, so every month that you are healthy, you pay them. When you get sick, you don’t have to pay them because they’ve failed at their job. They get rich when you’re healthy, not when you’re sick. Fed Up explores the obesity epidemic in the US and explores how private profits and special interests have been placed ahead of public health and how big buisnesses are making fat profits from unhealthy people.

Although Fed Up is very American-centric, everyone can find something useful to take away here. This documentary has it all, including some eye leaking real life stories, a call to action and the tag line “congress says pizza is a vegetable.” True story.

The movie is free on Netflix and if you’re up for it, there’s a Fed Up Challenge – can you go sugar free for 10 days?

This powerful documentary changed the way millions of Americans eat and if you watch it you’ll see why. The documentary argues that consumers have been kept in the dark not just about what they’re eating, but where it comes from and what it’s doing to their bodies. It explores how modern American food has been engineered and reveals a world where the food industry is more protected than the consumers it supplies. It explains why cheap food actually costs us more,  in terms of  the environment, for society and our health.

Although this documentary is very American-centric, there are important lessons for all earthlings,  plus some simple and  practical tips on how each of us can change the world, one bite at a time.

Watch the film online for free.

Have you seen any of these documentaries? Do you have any to add to the list? Have you made any healthy food swaps?