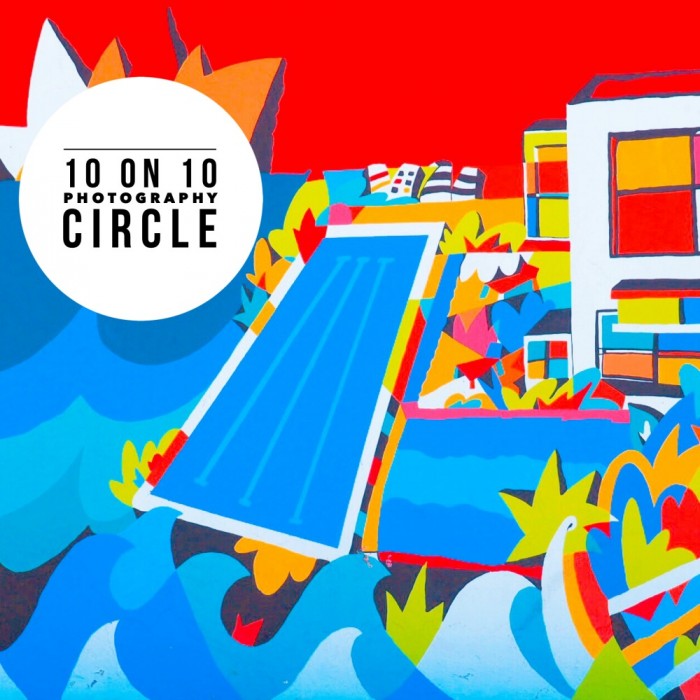 Well, what do you know, it’s the 10th of the month already! Of course, that means I’m joining in with this month’s Clever Cookie Photography Circle, which is more like a triangle because there’s only three of us! Don’t forget, when you’ve finished poring over my pics, be sure to bob on over and say hello to my mate Jen  in the deep south and then why not bob over and say bonjour to Cathy in France, how’s that for a bit of armchair travelling? We may be only three people but between us, we cover three continents.

It was also the first time (for years) that I made it to Bondi for Sculptures by the Sea. Not only did I get to stack up some steps, I also got to hang out with Jess, enjoy a natural vitamin D injection and experience awe, wonder with a generous side of bewilderment because as much as I enjoy modern art, I don’t always get it, do you know what I mean?

It’s also the first time, I played with the candy filter on my photos and as you’ll see, once I started I just couldn’t stop!

Sculpture by the Sea celebrated it’s 20th birthday this year and there was so much to see, we just saw the tip of the artistic iceberg. Sadly, the exhibition wrapped up on the 6th of the month but you can still join me and my candy tinted glasses on a virtual whistle stop tour of Sculptures by the Sea. Let’s get this candy party started!

Ladies and gentlemen, boys and girls, I present to you Measuring the Sky by Mimi Dennett. Forget 50 shades of grey, this is 43 shades of blue. If you don’t believe me, start at white and go clockwise…

I’m a sucker for colour so I loved Ken Unsworth’s New Opportunity. It looks to me like a rainbow coloured sky ladder or a milk crate stairway to heaven. 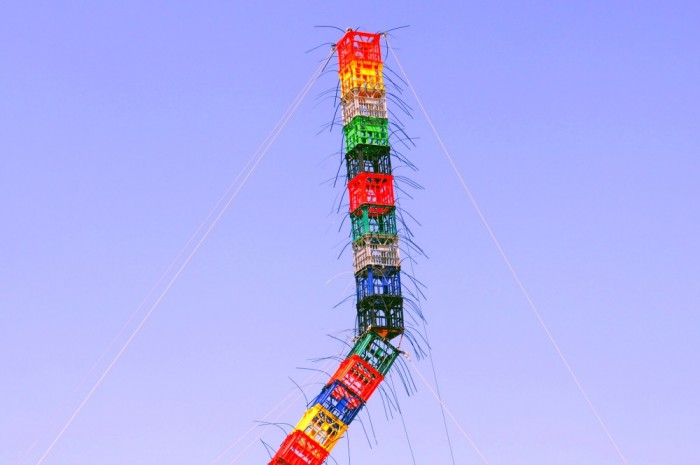 You can just see the New Opportunity making a guest appearance in Silvia Tuccimei’s Flower Power. The sculpture is made up of three modules about 3m wide. It took more than 20 people to create the 3m mirrored stainless steel “flowers” which weigh in at a hefty 800kg! 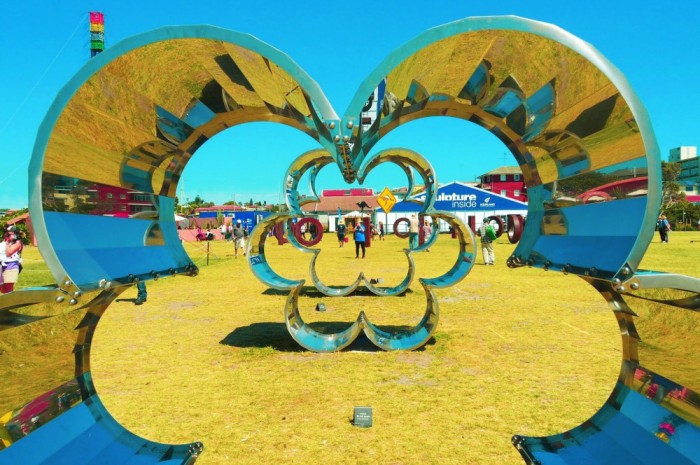 Love the light on the silvery steel of Inge King’s Celestial Rings. You have to love an artist whose work rhymes with their name. 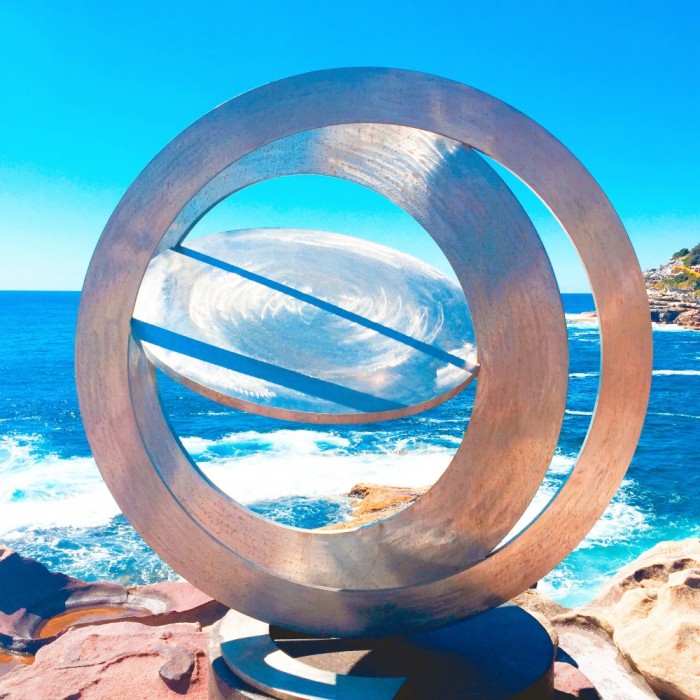 Marion Gaemers’ Weave the Reef, Love the Reef was one of our favourites, made from net, wire, beach and urban rubbish, there’s a lot to love here, not least, finding Nemo. Or should I say Nemos.

Made by the artist, Fibres and Fabrics and the Townsville community, it’s an artwork with a conscience highlighting the threats to the beautiful Great Barrier Reef. Now we’ve found Nemo, we should really think about saving him… And the planet. 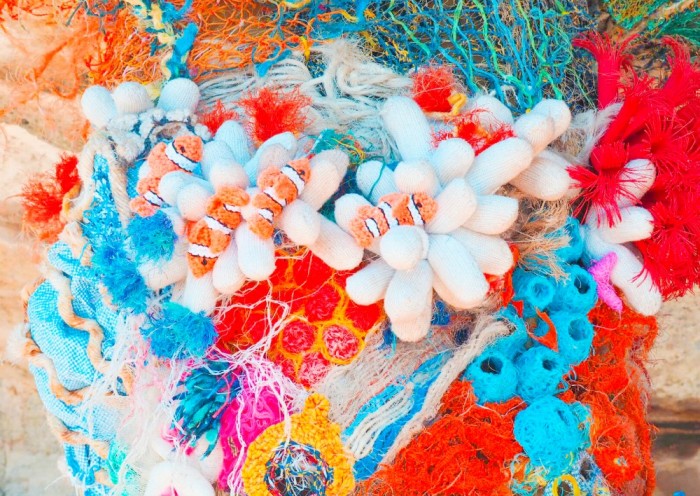 I really went to Candy Town on Cave Urban’s The Golden Hour. It took six people more than eight days to install the bamboo and steel orb. 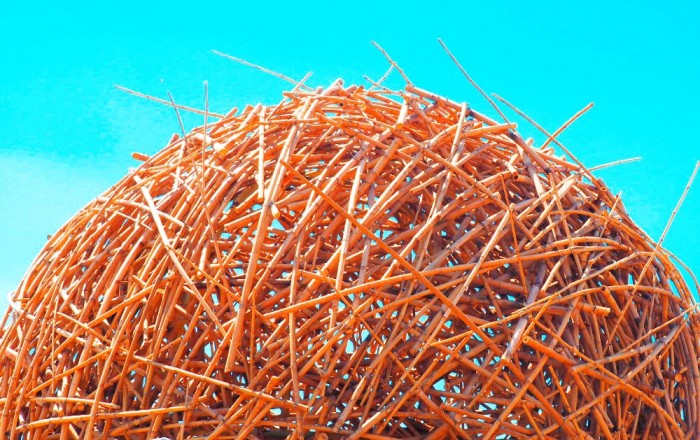 Merran Esson’s Catchment explores the way vessels can be a “divining colander.” It just made me think pink!

And the pink theme continues with Sean Cordeiro’s and Claire Healy’s After Party.  This  earth mover comes complete with party beads, disco balls and a smoke machine. It also comes with this artist statement: “Everyone wants to go to the party. Nobody wants to stay and clean-up.” Ain’t that the truth? 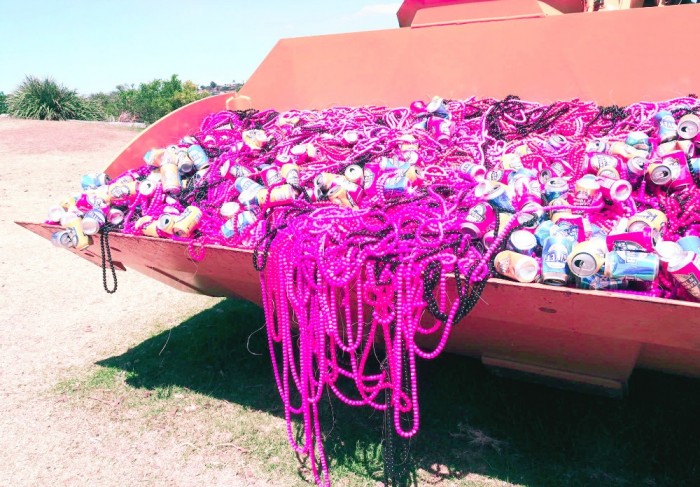 Oliver Stretto-Pow named this masterpiece Infrastructure 5 but I’d like to rename it 20,000 Leagues Under the Sea. 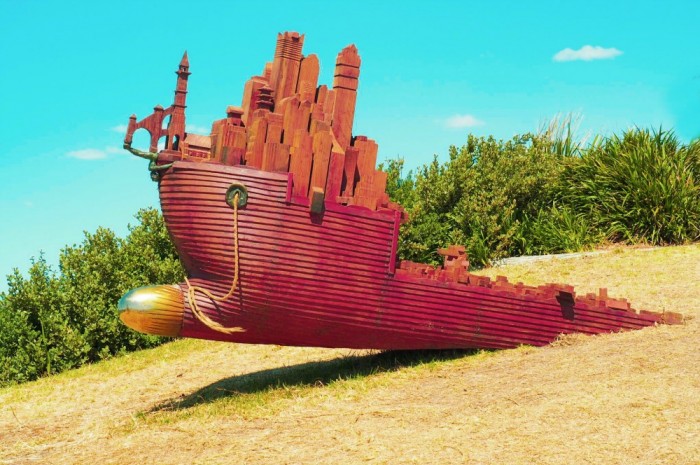 When I was single, my friend Sheila used to tell me, “everybody needs a good Dave. ” FYI, her hubby was a Dave, not that she was biased or anything. I have an Uncle called David  and a husband called David which is twice as nice. I think the organisers at sculptures must have also got the memo, because there was a sculpture called Dave too!

However, it should be noted that the only things Cathyann Coady’s Dave and my Daves have in common is their name. Jess snapped this shot and tastefully preserved Dave’s modesty because this is PG blog post after all. I then applied the candy filter… Because there’s no such thing as too much candy, am I right or am I right?! 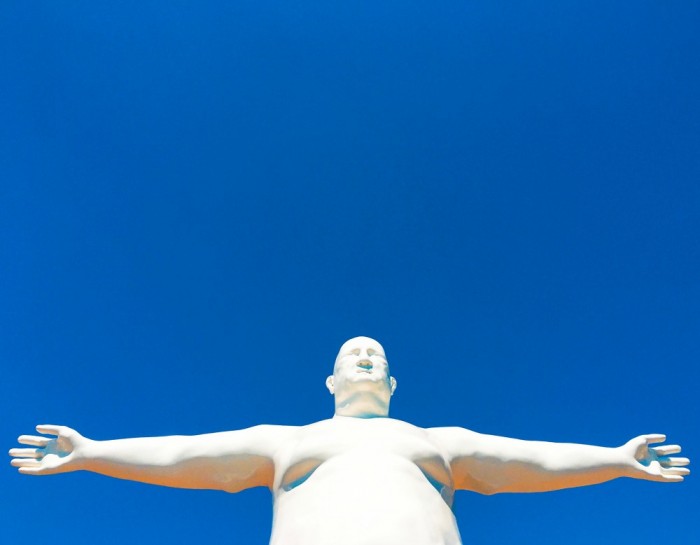 It was nice seeing you, Dave. I’m afraid, Dave brings us to the end of our virtual tour. Thanks for tagging along!

So tell me, which sculpture spoke to you? Did you have a favourite? Do you have any Daves in your life?

Now remember friends, the fun of the photography circle doesn’t stop here. Do bob on over and  say howdee to Jen and Cathy.  Be sure to check out their splendid snaps, and enjoy the photo fun!