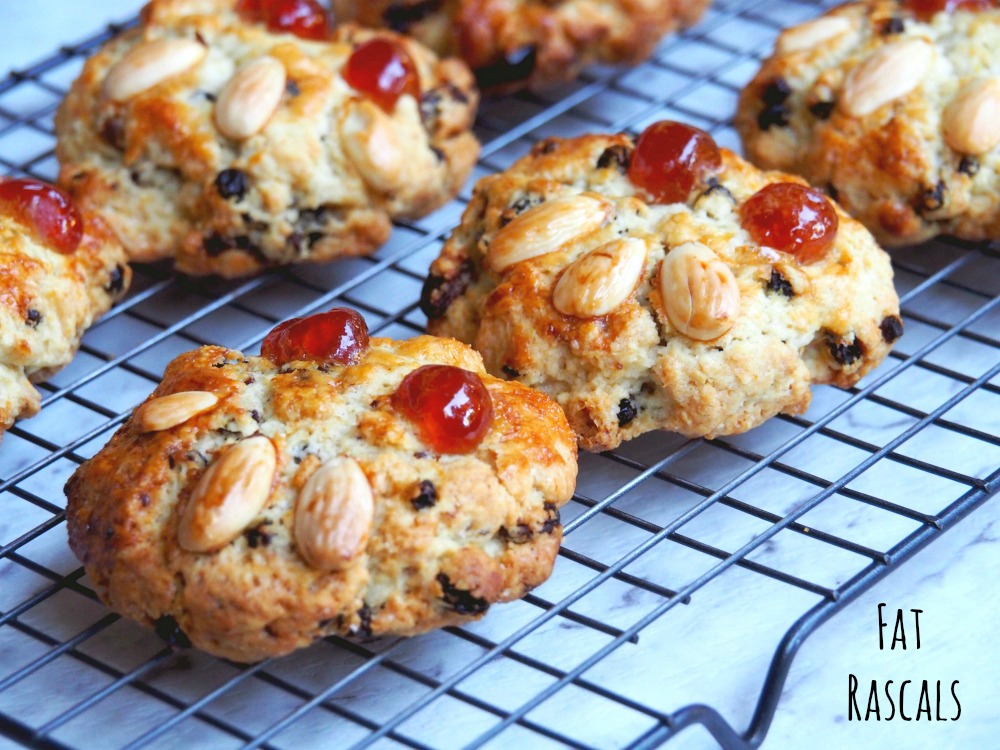 On my recent trip to the motherland, I just couldn’t get enough of the great British tearoom. We had such a jolly time in the North East but when Maureen, my mum-in-law suggested a day out in Harrogate, I was all over it… Because Betty’s Tearoom! There was the slight technical hitch of the four hour round trip but Bryan was happy to take it all in his strive, or should I say all in his drive! So that’s how one sunny Tuesday, me, David, his folks and his sister Jen pile in to the car for bonhomie at Betty’s. 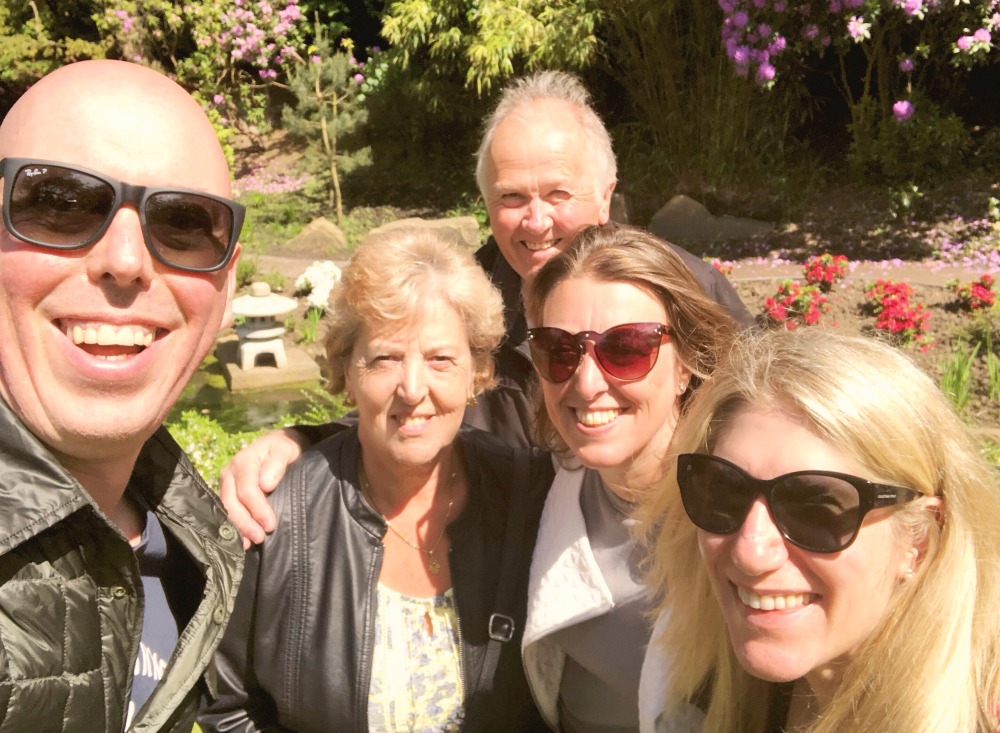 The queues here are legendary – on busy weekends they can snake around the block – and I don’t want to take any chances. Betty’s in my number one thing to see, eat and do in Harrogate so we hot foot it straight there. 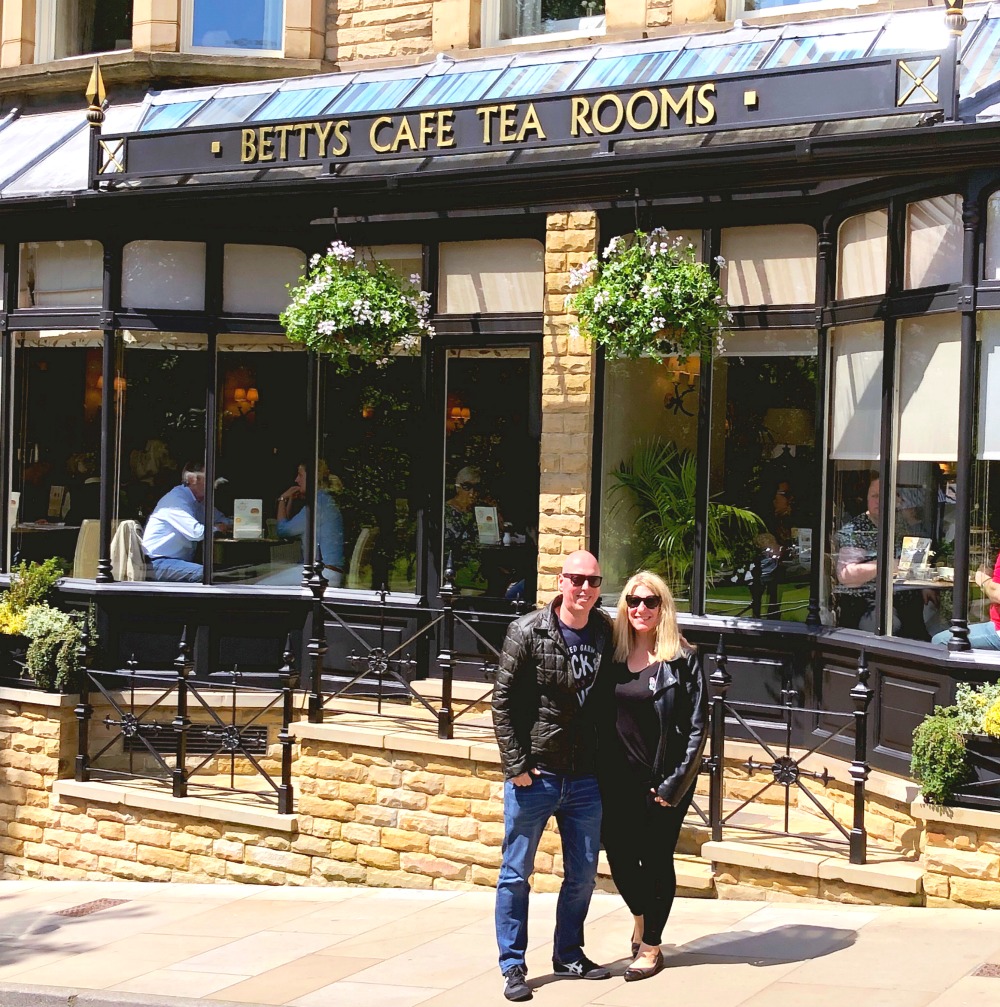 We needn’t have worried as there’s no queue and we stroll right in. At first, we’re seated downstairs in the lower dining room which is freezing and not my favourite. After a quiet word with the waiter, Jen scores us a table in the main tea salon which is light, bright and a lot more like it. Becky is our server and is just about as sweet as the treats she serves. 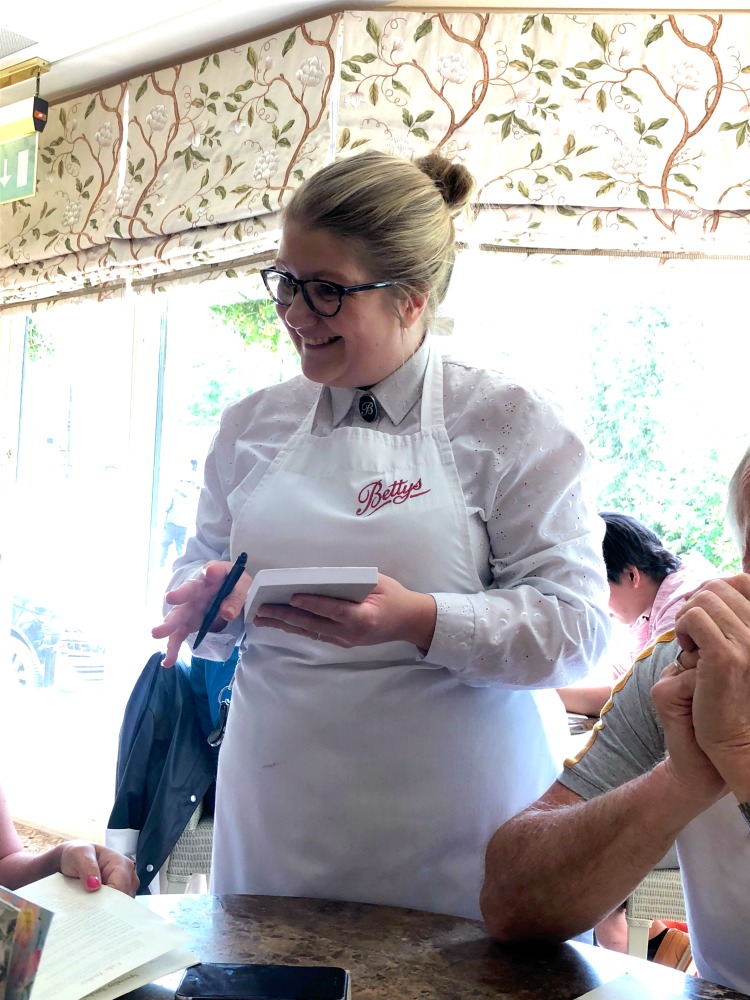 When I go to a restaurant or cafe I always ask “what’s good here?” but then it can get a bit awkward when they tell me what’s good but I choose whatever I want anyway. What can I say? I know my own mind! 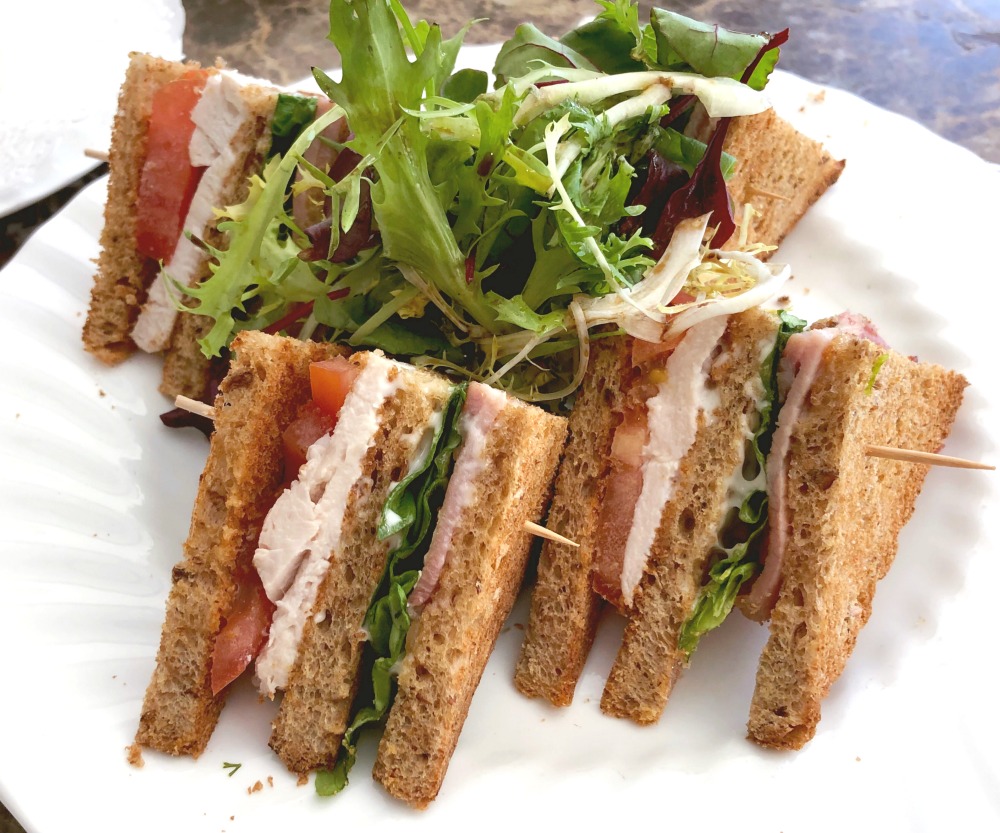 Becky helps us navigate the menu with some canny choices. Everyone chooses savoury options except me who chooses Yorkshire Tea because when in Yorkshire and all that… 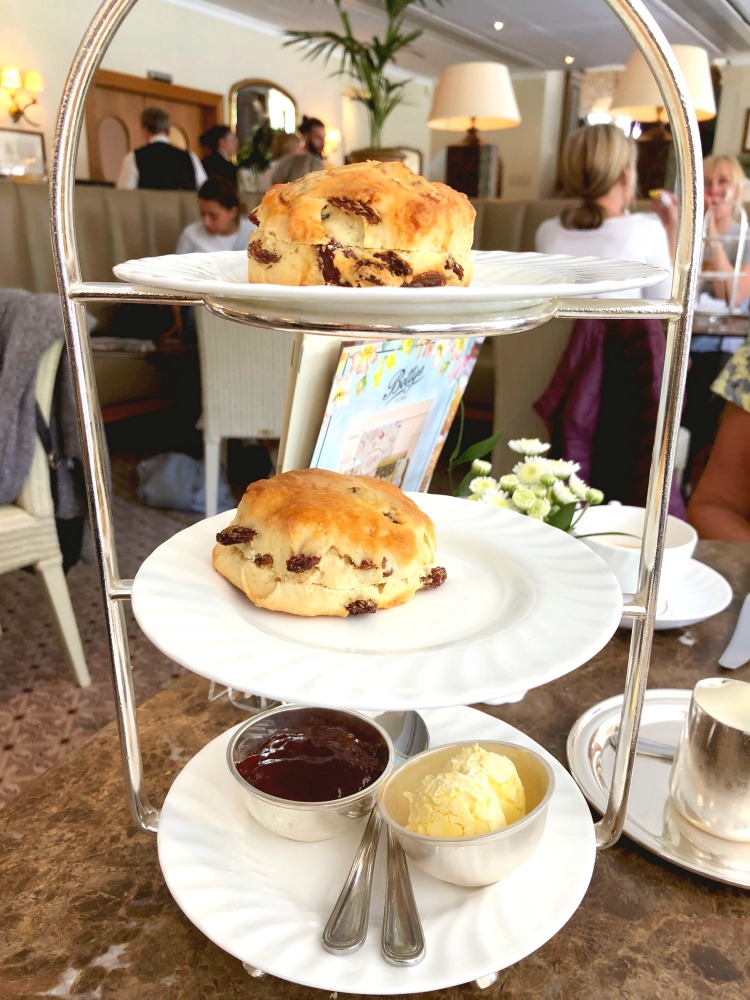 I could totally get used to having scones for lunch. Then we have the pressing matter of dessert to attend to. Bryan chooses this delightful Berry Frangipane from the cake trolley which did indeed look tempting. 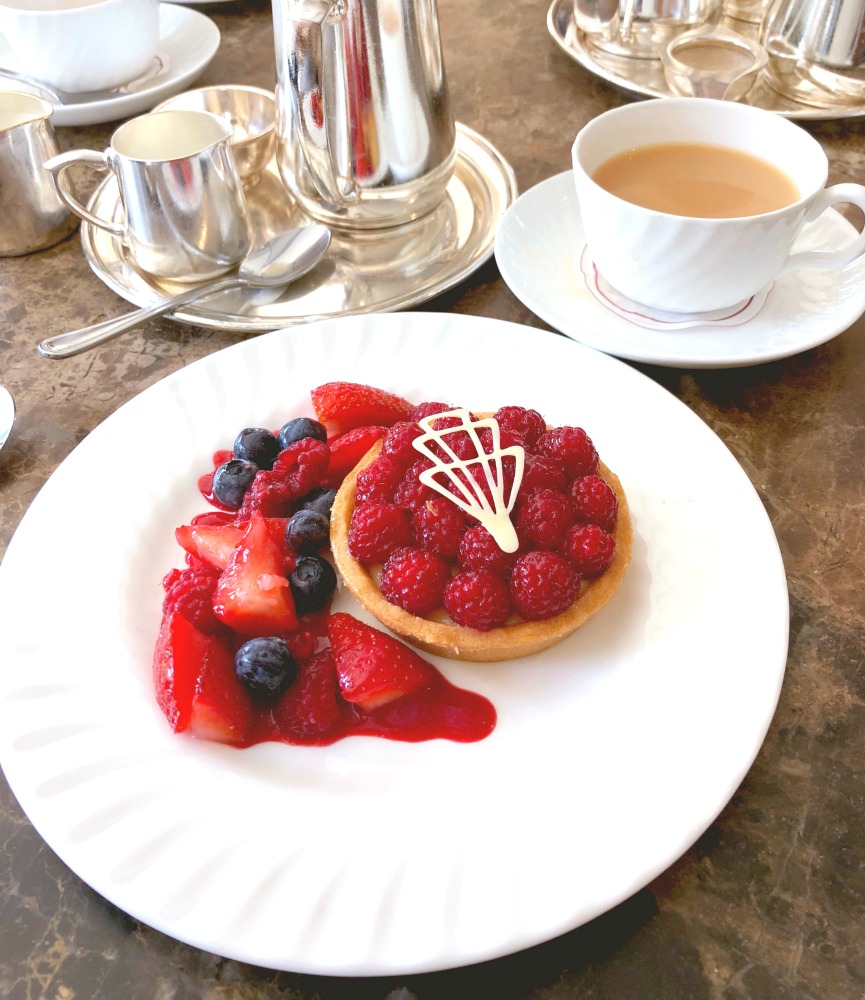 But I only have eyes for the Fat Rascal. I have long been obsessed with these teatime treats. Fat Rascals are Yorkshire baked and bred and were first introduced at Betty’s in 1983. According to Wikipedia they quickly became Betty’s best known and best selling product, selling over 375,000 rascals every year!  Not surprising then, that every time I tell anyone who will listen that I am headed for Betty’s, they always say “Oh, you must try a Fat Rascal!” Of course, I can’t bear to let them down! 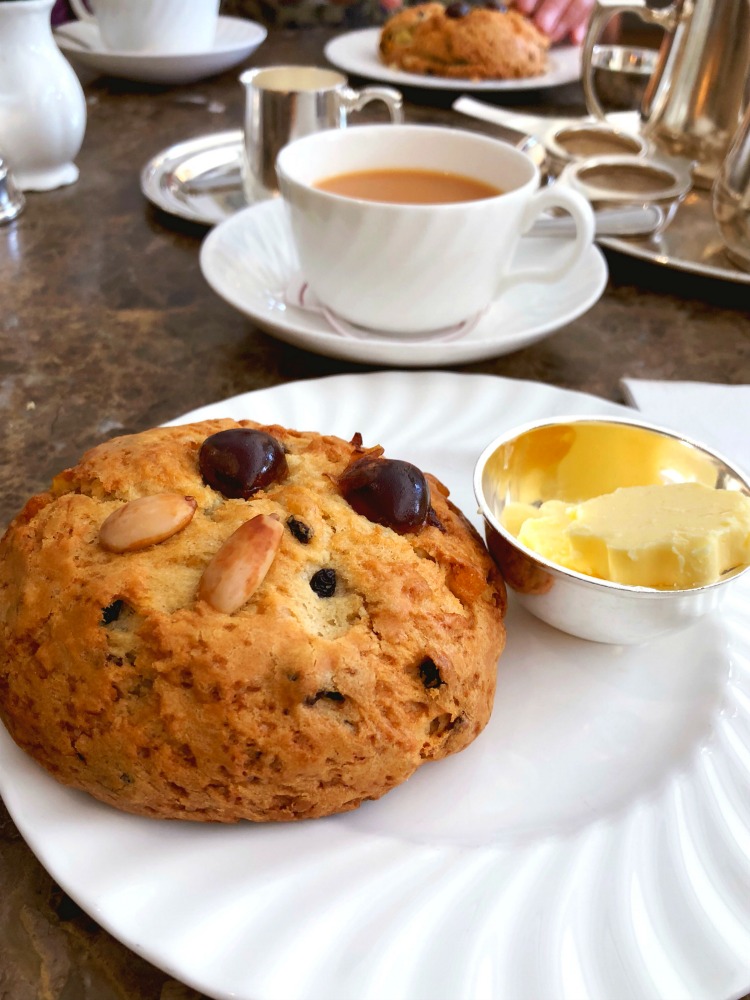 A Fat Rascal is  kind of a cross between a scone and a rock cake, best enjoyed warm and with lashings of butter. They’re quite zesty and fruity and oh, so delicious. I get quite excited when the lady in the gift shop tells me that they ship to Australia, but alas, not Fat Rascals. “insert sad face emoji” 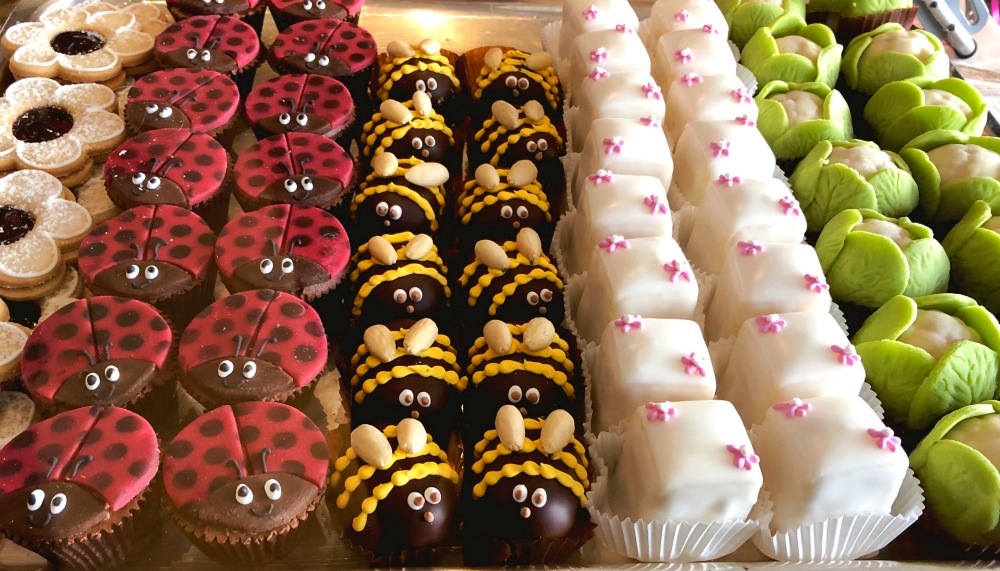 Well I’m a solutions driven kind of gal so I promise myself that if I can’t ship Fat Rascals down under, I’ll jolly well have to make them down under! Now, there are a few different recipes on the interwebs but obviously the people at Betty’s are keeping the original recipe under their hats. Some recipes use ingredients I’m not fond of like lard and mixed peel, so I’ve swapped them for ingredients I am fond of, like butter and the zest of real fruit. And of course, I’ve thermified the recipe, although  I have to say, this recipe is easy peasy with or without a Thermomix. 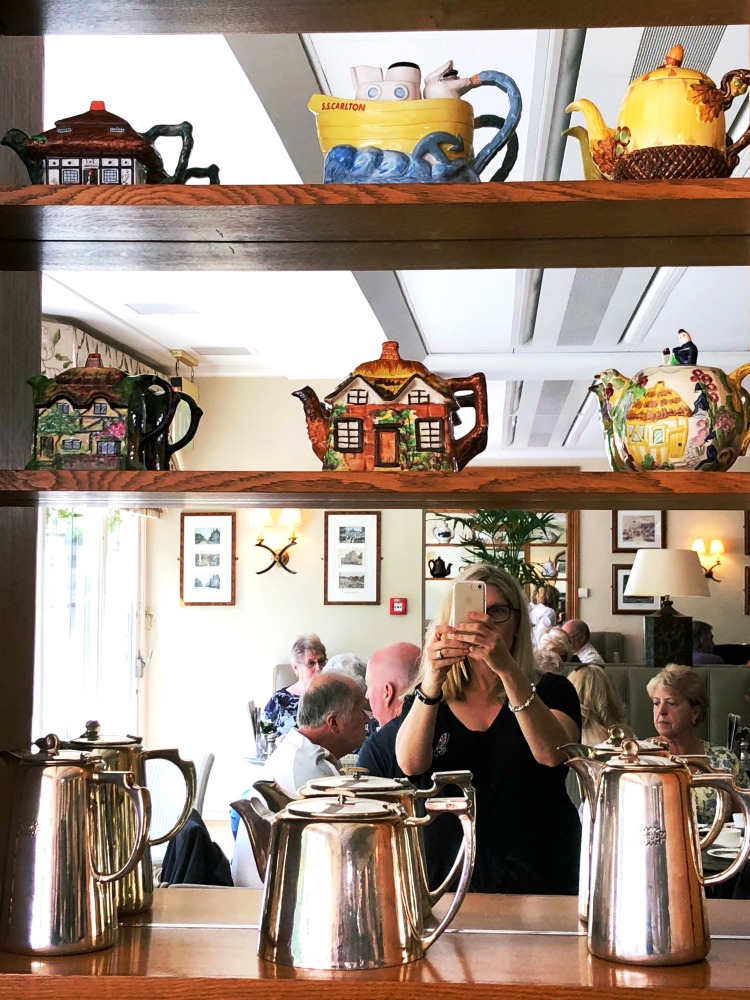 Even though I’m 47 I still like to play with my food and so I’ve my Fat Rascals have funny faces but if you want to be a little more restrained, you can decorate your Fat Rascals just like Betty’s or as you see fit! Although these are best devoured warm from the oven, these will keep for up to four days in an airtight container, if you can resist them that is! So here’s the recipe bringing a little bit of Yorkshire and a whole lot of delicious in to your kitchen… Wherever you are in the world! 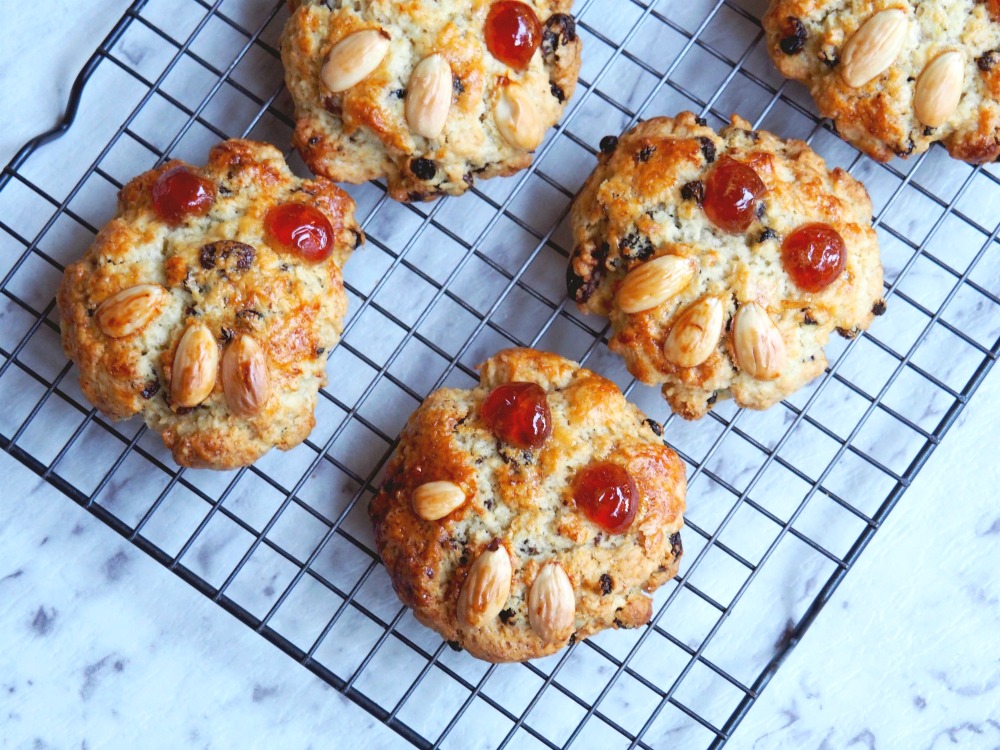